This article will walk you through how you can get started using Apptoto with Google Calendar. Once you complete these steps, Apptoto will be working in the background for you, automatically sending reminders and messages to your clients.

Apptoto connects to your Google Calendar/Contacts. For this to happen you should sign up with Apptoto using the Google Account that has access to the calendar(s) you want reminders sent out for.

Clicking that button will popup a series of Google prompts, asking you to give Apptoto permission to access your Google Calendar/Contacts. Please accept them. You can always revoke this access later if you decide not to use Apptoto.

Because you signed up using your Google Account, Apptoto will assume you want your Google Calendar connected. Don’t worry, no messages will be sent automatically until you tell Apptoto to send something.

After the calendar has been added you will be taken to your Appointments tab. Here you can see the upcoming appointments that Apptoto has found, and what contact information has been extracted from them. 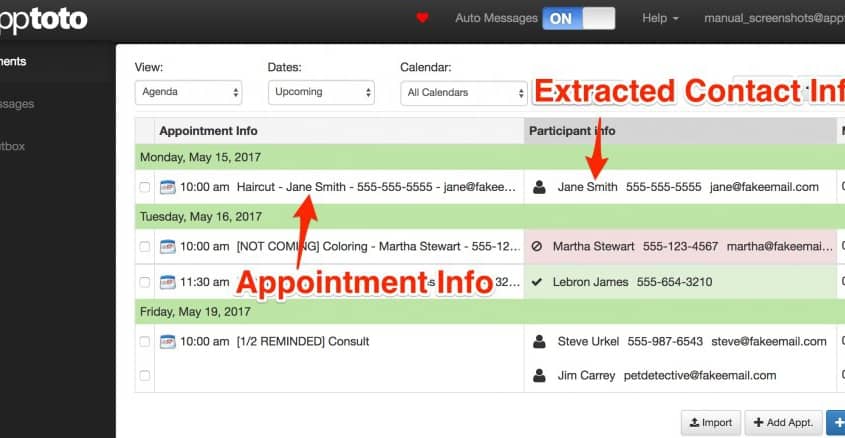 It’s possible no appointments will be found immediately. That might be because Apptoto hasn’t synced enough of your calendar yet. Reload the page or the click the “Sync” button to ask Apptoto to sync right away. Apptoto will automatically sync with your calendar once an hour.

It’s also possible that you store your appointments on a different calendar than the default Google calendar for your account. If that is the case, then click the “Add Calendar” button and then click “Google” to add an additional calendar.

Now that your calendars are connected, next steps to setting up your account is to set up your default messages. For a walkthrough of that, see message setup.