Apptoto provides a “Sync Agent” that can run on a Windows desktop and connect Apptoto to your SQL Database for the purposes of syncing Calendars and Address Books information. 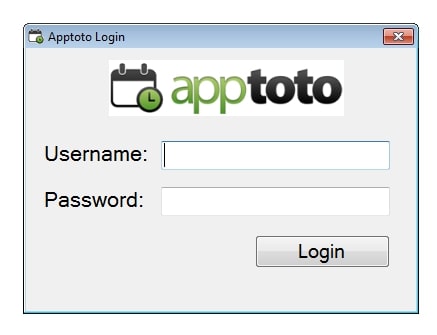 * Best option is to use your “API Key” in place of the password here. The API Key is located on the “Settings” > “Integrations” tab and the “API Keys” section. This enables Apptoto to stay connected even if you update your Apptoto password leading to a more stable connection to sync the data. 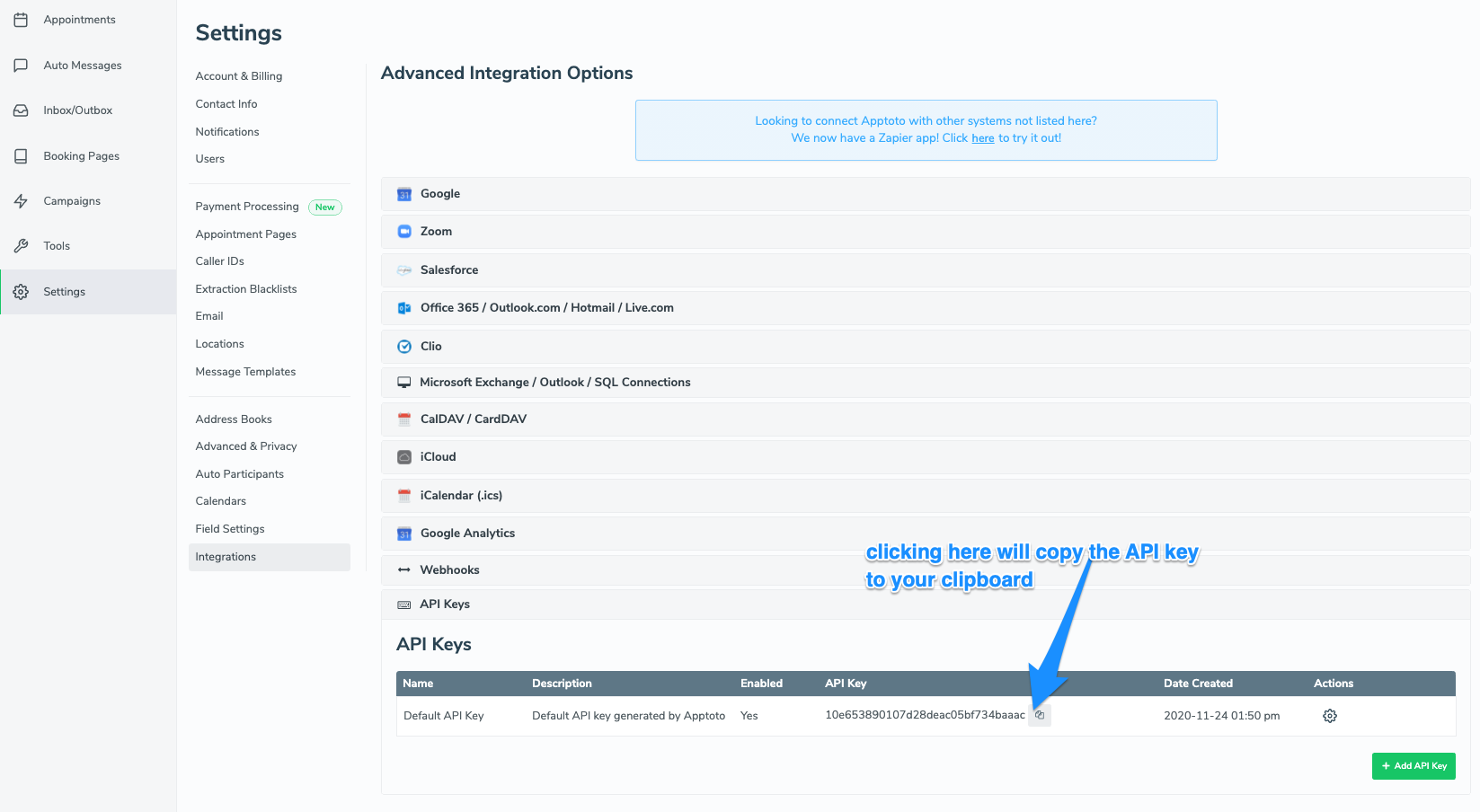 Change the connection type to “SQL – ODBC” and enter in the proper connection string. 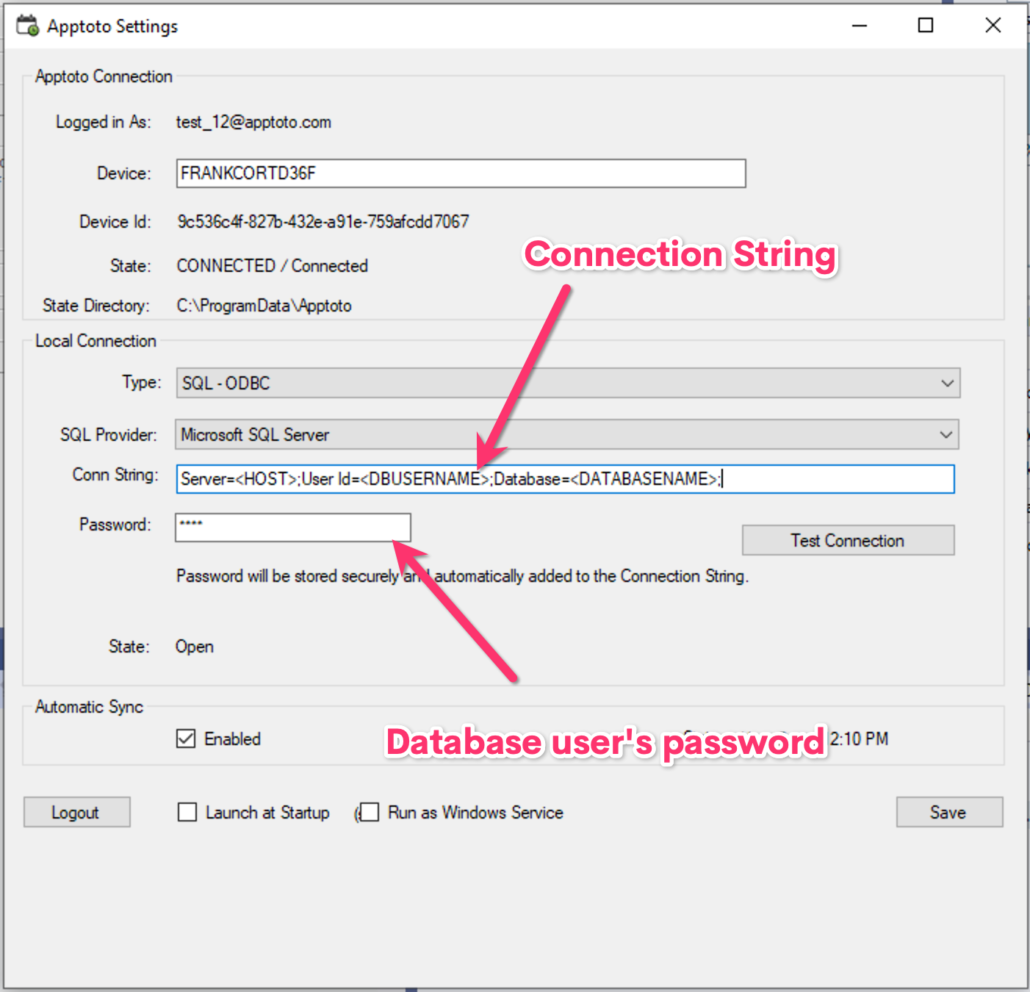 If you would like to use a ODBC connection to connect Apptoto to your database, then leave the “SQL Provider” as “ODBC” and then use the following connection string format:

If no username is needed, then you can just set the connection string to DSN=<ODBCSOURCENAME>;  .   Normally you won’t be able to run the sync agent as a service though, unless you provide a username for the odbc connection.

At this point, an Apptoto support representative will be able to configure the Calendars in Apptoto based on the SQL Schema in the database you’ve connected. So please send an email to support@apptoto.com requesting assistance.

*You may be able to skip the steps below if the “Run as Windows Service” checkbox is not greyed out for you. In that case, you can just check it and click “Save”.

If the “Run as Windows Service” checkbox stays grey, and you are not able to check it, then follow these steps to configure it from the command line:

Once the Apptoto Sync Agent is up and running and connected to your Database through ODBC… Apptoto support will be able to set up a one or more calendars through it. If you’re curious about how this works technically, keep reading, otherwise just work with Apptoto Support to make it happen1

Each calendar will be configured with a different SQL query. The query will run once an hour and sync appointments (using the designated Start Time field) 7 days into the past and 30 days into the future in 1 week chunks. That time range and chunk size can be adjusted.

The standard set of fields that we can pull in through the query include:

If your database has multiple phone/email addresses (e.g. home, mobile, work), then we can pull those in too. Apptoto will use the mobile number if one exists, otherwise it falls back to home, then work.

If your database has separate date and time fields, then the query will need to combine them into one. e.g.

Also, if there isn’t a “title” field” then Apptoto can be set up to create appointments in Apptoto with a default title. e.g “Appt with {{ participant_0_name}}”.

Lastly, besides the standard fields… we can pull any other field in from the SQL query and store it as a custom field in the event in Apptoto. E.g. if you have a field for the type of appointment, then we can stash that in event.custom.appt_type and use it in messages or conditions inside of Apptoto.

Apptoto does have the ability to write back to your database when clients respond. For example, we can update a specific column if someone confirms, or cancels.

To do that, Apptoto Support will have to come up with an “UPDATE” statement that sets the field you want updated. The WHERE statement will use the unique appointment id to only update one appointment.