An Apptoto Webhook Action is simply a HTTP POST request made from Apptoto’s servers to an URL endpoint of your choosing. A Webhook Action can transmit data from Apptoto across the web to another system or third party product and is a powerful tool that can be used for reporting purposes or integrating services with Apptoto.

To setup a Webhook Action to respond to triggers, click the Webhook “add” button in the Webhook Triggers section under the trigger form after creating a trigger or clicking a trigger’s settings button:

This will result in a new form rendering below the trigger form that allows you to configure a Webhook Action: 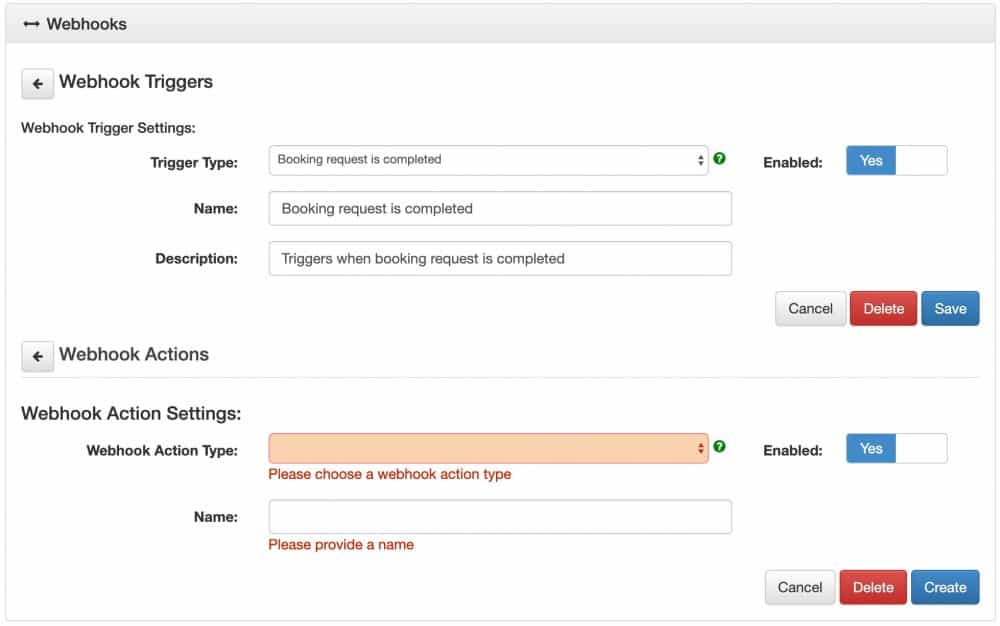 To setup a Webhook Action, select “Send webhook notification” under the “Webhook Action Type” field. Upon selecting this value, a “Webhook URL” field appears; this field stores the web endpoint (e.g. an API endpoint or a Zapier URL) that the Webhook Trigger will attempt to reach when the trigger executes. As with any of the other types of Webhook Triggers, a name field is provided so that you can assign an identifier to the Webhook Action and easily find it later.

Phone number is added to stoplist

Email is added to stoplist

For a Webhook Action, this will return a table listing the instances in reverse chronological order, with their corresponding state or status, indications of whether the Webhook Action was successfully sent from Apptoto and delivered (received by target system), number of attempts, as well as means of inspecting the payload and response for each instance. You can also filter logs based on whether or not the Webhook Action is successful, as well as sort the table by individual columns.

Webhook Actions in Apptoto are different from other types of Webhook Triggers in the sense that failed Webhook Actions will retry in certain circumstances. In Apptoto, a Webhook Action is considered successful when a HTTP 200 response is returned from the server that Apptoto is doing a POST request against. If the resource that Apptoto is posting against encounters a 500 series error (e.g. a 500 internal server error or a 502 bad gateway error), Apptoto assumes that the problem might be temporary and will retry the request again up to five attempts. If a 400 series error is returned when the Webhook Action request is made (e.g. a 403 forbidden error or a 404 not found error), Apptoto will assume that a configuration error was made when setting up the webhook or that the webhook endpoint isn’t valid and thus the request instance should not be reattempted.