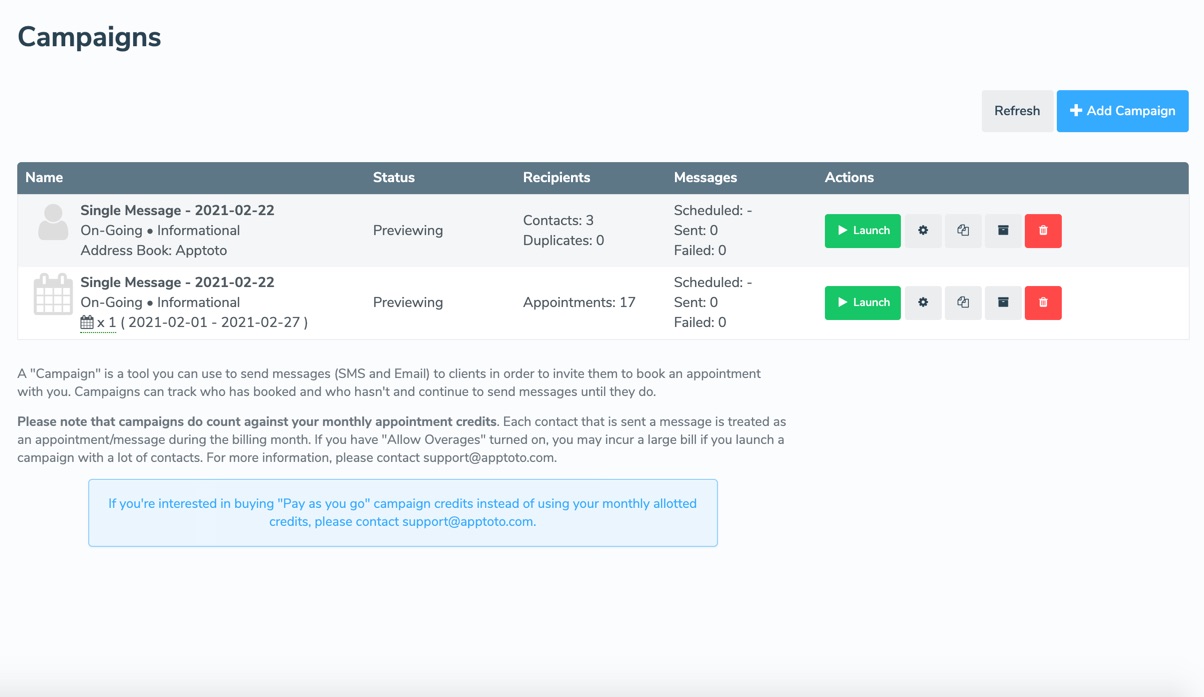 Setting up a Campaign

To set up your first campaign, you’ll first need to ensure that you have a Booking Page established for your clientele to set up their own times with you. Once that has been set up, navigate to your “Tools”>“Campaigns” tab, and click the blue “+Add” button, which will open this small new window for you to specify a name for this campaign, as well as the specific address book to contact and the booking page to schedule their appointments on. 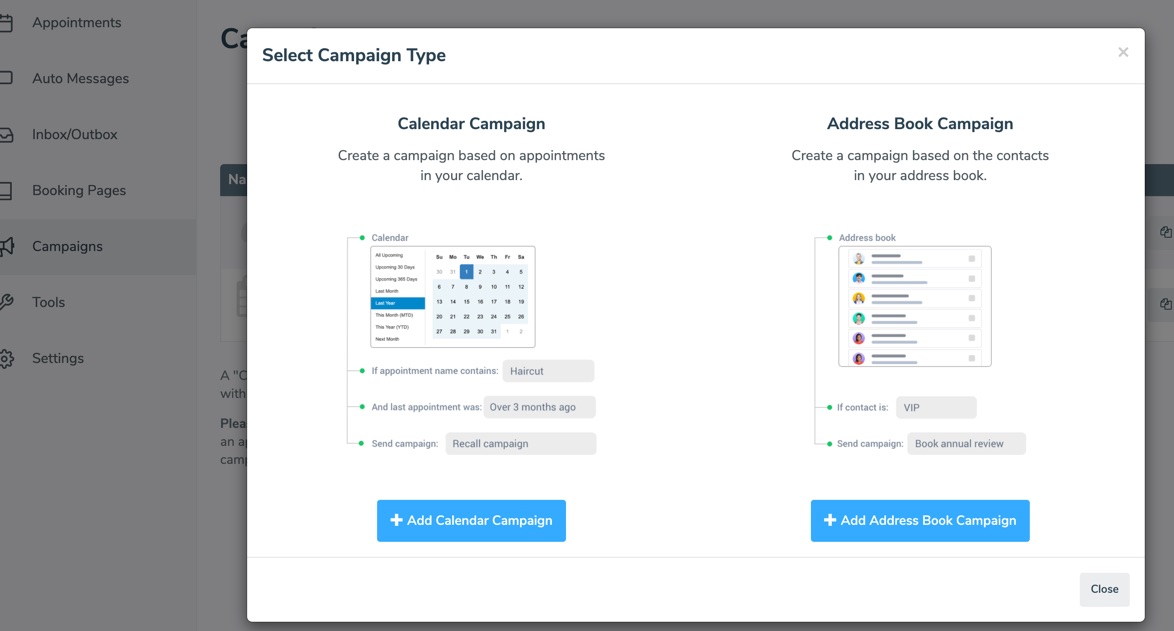 Once you’ve generated your new campaign, you’ll be redirected to your list of campaigns, at which time you’ll be able to launch said campaign, or view the details thereof by clicking the Details button on the right-hand side. 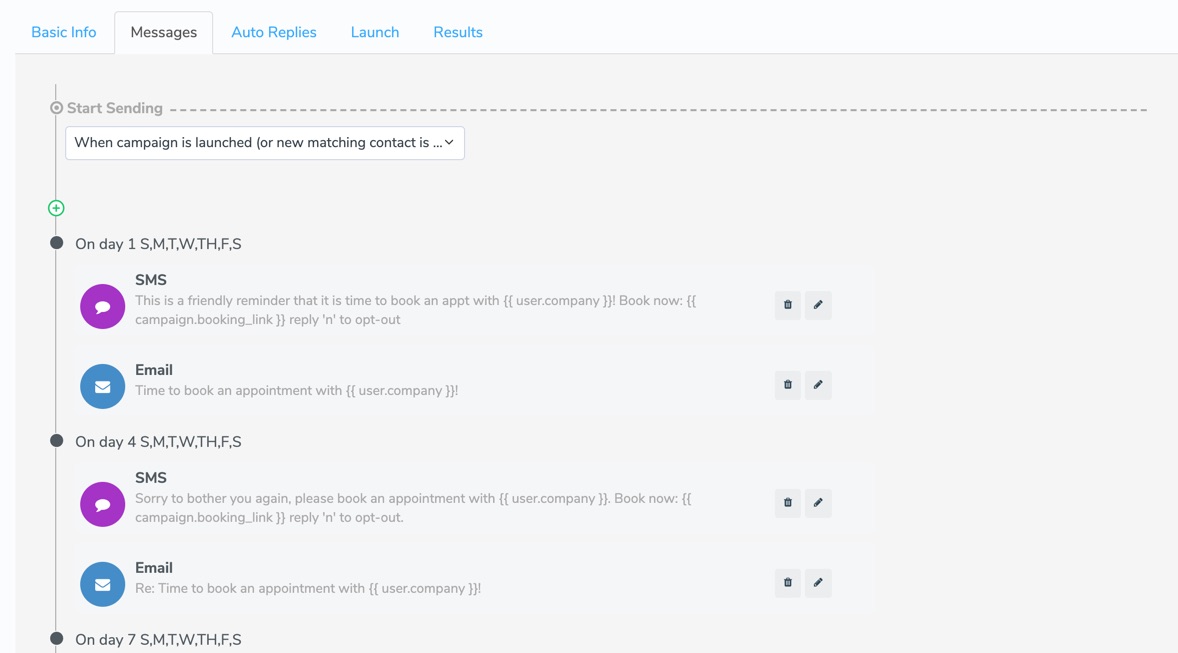 Apptoto will start your campaign with a series of default messages that you can modify to your needs by simply clicking the pencil icon next to each, or you can delete existing/add new messages using the corresponding buttons. 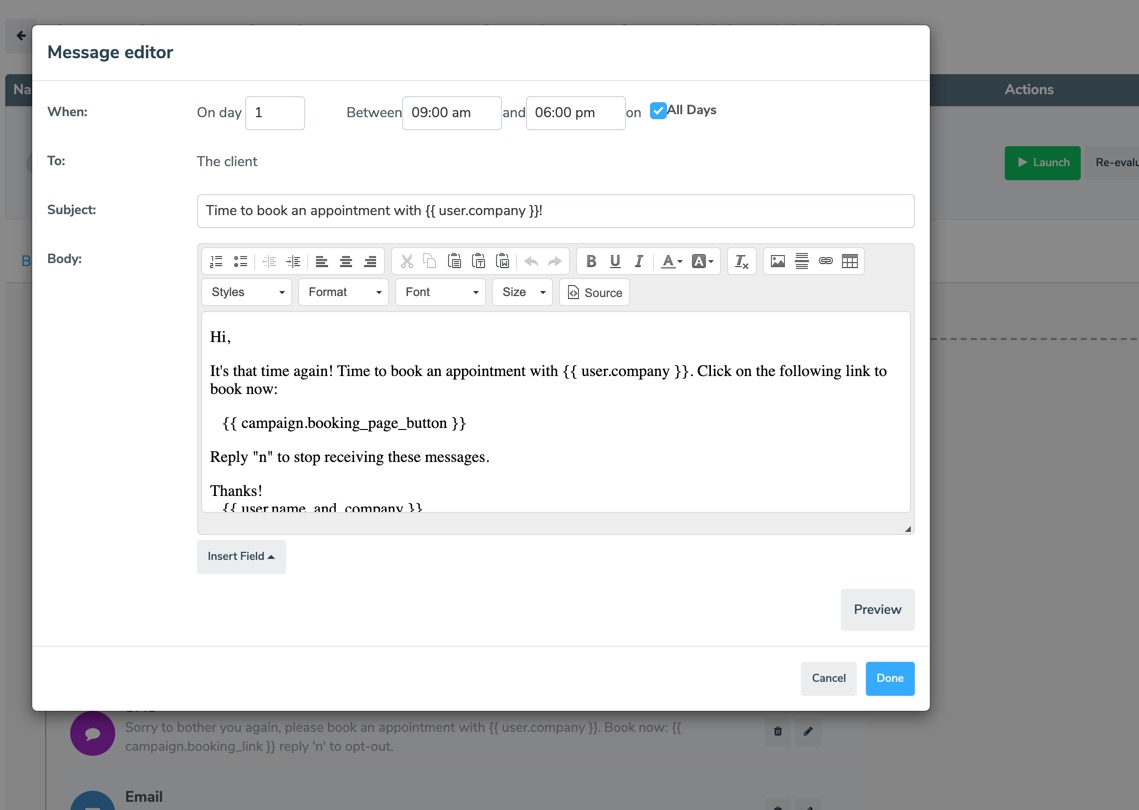 This message editor works largely the same way as your Auto Messages, using fields to pull in relevant info for each message.

*The most important part of these messages is the campaign.booking_link, which will insert a unique URL that Apptoto then tracks to determine if your clients have actually booked an appointment.

Once the timing and content of these messages are to your liking, you can then launch your campaign from the main Campaigns tab. This will generate a new Apptoto-specific calendar within your account and will host a fake “appointment” for each of the entries in the address book used for that campaign.

Once your messages are established, you can then launch your campaign to trigger Apptoto to start sending those messages. At any point, you can pause the campaign for any reason, and restart it when you’re ready again. 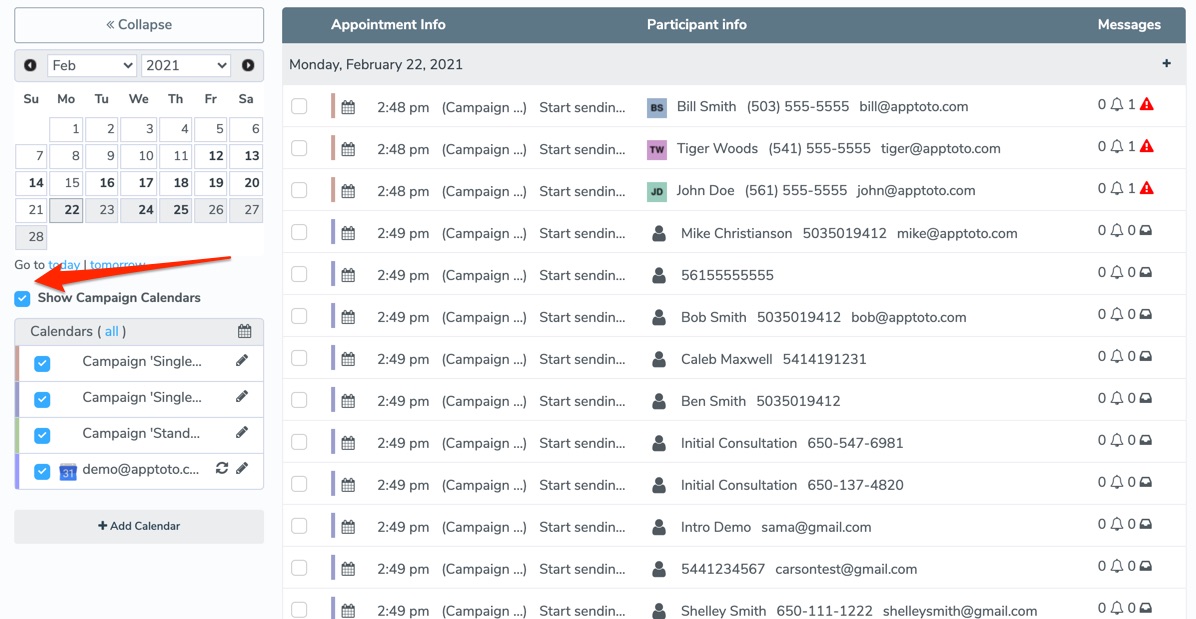 For each new campaign created, Apptoto will automatically generate an Apptoto-specific calendar to host all of the “appointments” for which it will send the campaign messages to, which can be viewed in your main Appointments tab. This is helpful to see at-a-glance info for all of the contacts in your campaign, as well as remove individuals from the campaign by deleting their “appointment” on that calendar.

This tab of the campaign settings will give you at-a-glance information for each person contacted in this campaign. You’ll be able to see the status (still getting messages or already booked) and number of messages sent for each person.

At any point, you can add or remove a person from a campaign by simply adding or removing them from the address book being used by that specific campaign. As soon as a new entry is detected, Apptoto will generate an “appointment” on the campaign calendar for that person and start sending messages. Additionally, as soon as someone is removed from that address book, they will be removed from that calendar and stop being contacted by Apptoto for that campaign.