It’s always fun to see our clients making use of Apptoto in ways we never thought of when we first built it.  Most of our readers/users know us as simply an Appointment Reminder system; however Apptoto is really an appointment messaging platform that can be used in many creative ways.

One such example is a “reverse phone tree” we started 2 years ago to help our Founder’s family encourage their 83-year old grandmother to go for a walk twice a day.

Setting up a “reverse phone tree” like this in Apptoto was actually quite simple.

In summary, we set up a calendar in Apptoto that contains “fake appointments” for when various members of the family should be reminded to call Grandma.  Apptoto sends a voice call at the start of each event on the calendar to the family member. The family members are given the option “press 1 to be connected”.  If 1 is pressed, the family member is directly connected to Grandma (using a hidden “Call forwarding” feature inside of Apptoto).

Since we set this up in 2016, Apptoto has orchestrated over 1,100 calls to our Founder’s grandmother from her children, grandchildren, and great-grandchildren.  During those 1,100 calls, countless stories have been told, wisdom has been passed on, and Grandma has reliably been reminded to go for a walk by someone she loves.

“I’m thrilled that Apptoto is being used in creative ways, ways we never thought of when we built it. In this case, it’s being used to connect the older generation with the newer generation which is something I strongly believe needs to happen more,” our founder, Frank Cort, said about this initiative.

If you’re interested, here are the detailed steps we took to remind family members to call Grandma.  While these steps are focused on calling Grandma, the same set of steps could be used to set up a phone tree for other purposes.

Step 1. Create and connect a new calendar to Apptoto

To keep things clean, we started by creating a separate calendar in Apptoto named “Grandma’s Calls”.

Creating a unique calendar for this purpose allows us to separate the “fake appointments” used for triggering call reminders from our other work-related appointments throughout the day.

To accomplish this, we navigated to the “Settings” > “Calendars” tab in Apptoto and clicked “Add.”

We then scrolled past all the options to connect an existing calendar and entered “Grandma’s Calls” into the Calendar Name field and clicked “Create Calendar.”  Doing so created a new calendar in Apptoto only.

The next step was to invite family members to sign up for designated time slots. (This can now be accomplished using an Apptoto Signup Page, but that feature wasn’t available when we first set this up, so we had to rely on old-fashioned email to send a request to each family member.)  We asked everyone to pick which day of the week and time they wanted. For the time of day we gave them the option of 11 am or 4 pm. Those times were chosen because they were around when Grandma likes to go for her walks and part of what each family member was supposed to do when they called her was to ask her if she’d done her walk yet. 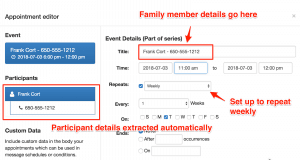 With all the members of the family signed up, and the fake appointments created, we were ready to set up the automatic reminder messages.

Because we eat our own “dog food” (as they say in the technical world) and use Apptoto to send reminder messages for our own customer appointments, we needed to create a customized set of messages devoted only to reminding family members to call Grandma.

To do that, we first turned on an advanced option called “Multiple Message Schedules” on the “Settings” > “Advanced” tab. 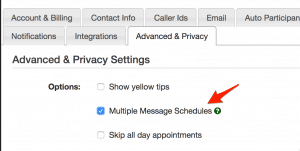 Apptoto gives you 3 default messages when you first create a new Message Schedule, so we removed all of those by clicking the trash can next to each message.

After that we created one call reminder in the new Message Schedule.

We configured the new call reminder to be sent at the “Appointment Start Time”.

In addition, we set the “Time of Day” field to “Any” to avoid any issue with the appointment being outside of our normal call schedule.

For the body of the appointment we opted to simply say “It’s time to call Grandma Nancy and remind her to complete her walk.  To be connected with her now, please press 1.” We could have uploaded an MP3 file using our own voice, but we thought that might be overkill since family members would probably just answer the phone and press 1 right away once they got the hang of it.

Here is what the call reminder settings look like:

We wanted to make it as easy as possible for the family member to call Grandma when they received the reminders.  We knew that if they had to hang up and then call Grandma on their own that they probably wouldn’t do it.

So we set up an “Auto Reply” to forward them to Grandma when they press 1.

To do that, we first had to check “Show Auto Replies” at the top of the Message Schedule.

Then under the call reminder we clicked “Add Auto Reply / Action” and added a trigger for when the client dials “1” that forwards the caller to Grandma’s number.  The forward to” action option is one that is not available by default, so if you are interested in doing this, please let support@apptoto.com know.

As a side note, initially when we rolled this out Grandma never answered the calls.  We asked her why and she said she hadn’t realized we had started calling her; but, coincidentally, she was receiving a call from some weird phone number every day at 11 am and 4 pm!  It turns out that Apptoto’s “forward to” feature was forwarding the call to Grandma in such a way that she would see our Apptoto reserved number on the caller ID (which was foreign to poor Grandma).

The fix for this was simple… we changed Apptoto to forward calls using the caller ID of the participant (in this case the family member).   Once we did that Grandma answered every call! This behavior is on by default for all Apptoto users now.

Once we had our Auto Message Schedule and Call Reminder created and configured properly, it was time for us to turn them on.

To do so, we had to first make sure that the individual message was turned on in the schedule.

And then we turned on the entire Message Schedule here:

Setting up a “reverse phone tree” in Apptoto is not that difficult and can successfully motivate individuals in a group to call someone reliably and take action.

Keeping Apptoto diverse and customizable is one of our greatest strengths.  If you need our support team’s assistance to setup Apptoto to simplify your personal or professional life, you can email us at support@apptoto.com.  We are happy to help.