﻿Apptoto Webhooks allow you to integrate Apptoto’s Appointment Messaging & Scheduling Platform further into your workflow, by triggering things to happen when certain events happen in Apptoto (e.g. when someone books an appointment with you, or when someone is a no-show).

Recently we took our Webhook platform out of BETA and made it generally available to all users.

You’ll find the settings for this feature on the Settings > Integrations > Webhooks section of your Apptoto portal.  You can also find more information about webhooks in our reference manual here: /apptoto-manual/article/webhooks/

Webhooks are a powerful technology that allows a cloud service, such as Apptoto, to communicate (in real time) with another cloud service or an on premise solution.

Basically a Webhook is a way to tell Apptoto to visit a URL (like you would in a browser) automatically whenever a specific trigger happens in Apptoto.  That can be used in conjunction with other services that offer special URLs to be visited in order to trigger things to happen in those services.  For example, with Apptoto Webhooks, you can tell Apptoto to visit a specific URL that triggers a message to be sent to a Slack channel whenever a client cancels an appointment.

So, if you’ve ever thought “I sure wish that X could happen automatically whenever Y happens in Apptoto,” it’s very possible you can make that happen using Apptoto Webhooks.

Some example uses for Apptoto Webhooks include:

This blog post will walk you through how to use Apptoto Webhooks to send a message to a Slack channel whenever someone cancels an appointment through Apptoto.

Slack is an amazing business messaging application that can be used to communicate easily with team members.

In this example, we’ll use the popular service Zapier to setup a “Zap” that receives the Apptoto Webhook and forwards it to Slack.

Here is diagram showing how Apptoto will communicate with Zapier to send a message through Slack. 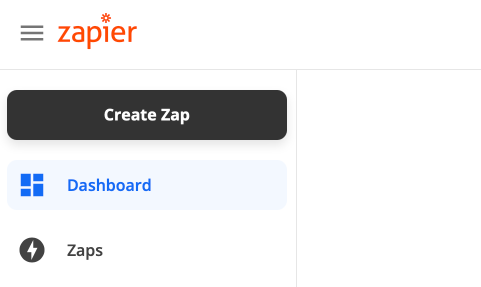 Then choose “Webhooks by Zapier” as your Trigger App, and choose “Catch Hook” as your trigger: 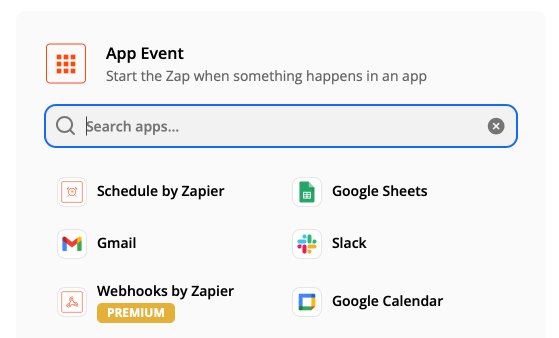 Zapier will then generate a URL for you to send a webhook to.   Click copy to copy it to your clipboard: 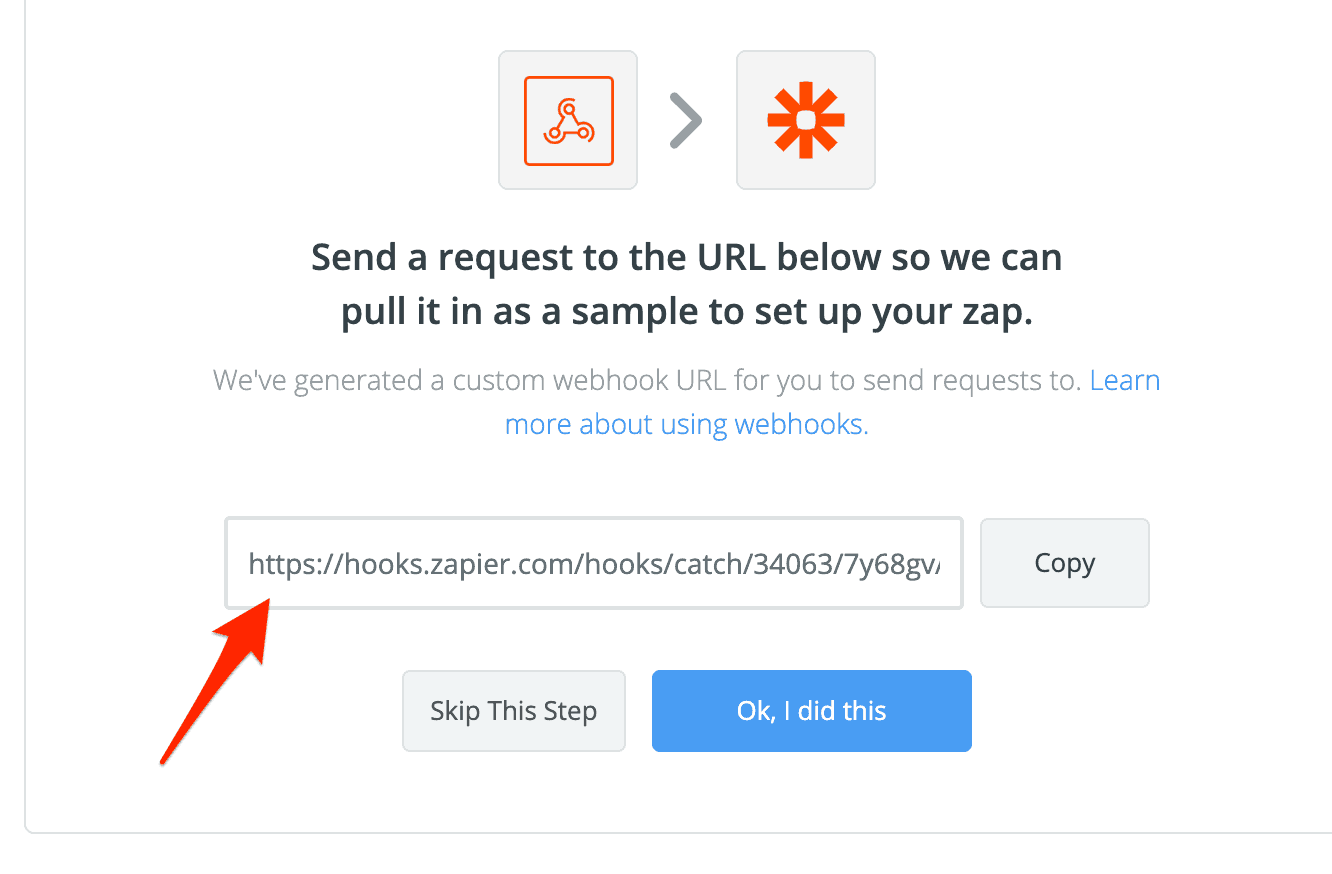 The Webhook URL that you copied in the last step is the URL that you should tell Apptoto to hit whenever someone cancels.  To do that, navigate to Settings > Integrations > Webhooks in your Apptoto account, and click “Add”.

Then choose “Participant not coming” as the trigger type and click “Create”.

Next click “Add” to add an “Action” to that new trigger.

Then choose “Send webhook notification” as the action type, and paste the URL from Zapier into the Webhook URL settings and click Create to create the action.

Step 3) Trigger the webhook by yourself

In this step, you need to trigger the webhook to be sent manually in order to show Zapier what it will look like when this happens in the future for real.   To do that, create a fake appointment in Apptoto with a phone number (or at least one participant).  And mark that appointment as cancelled from the actions menu in the event.

Step 4) Finish setting up your “Zap”

Now you can head back to Zapier, and click “Ok, I did this” to tell Apptoto that we’ve sent some data to the URL that it told us to send to.

Zapier should show you that a “Sample” is now ready and you can click “Continue”, if not then make sure your Apptoto Trigger and Action are enabled and manually mark an appointment as cancelled again.  Sometimes it takes a few times. 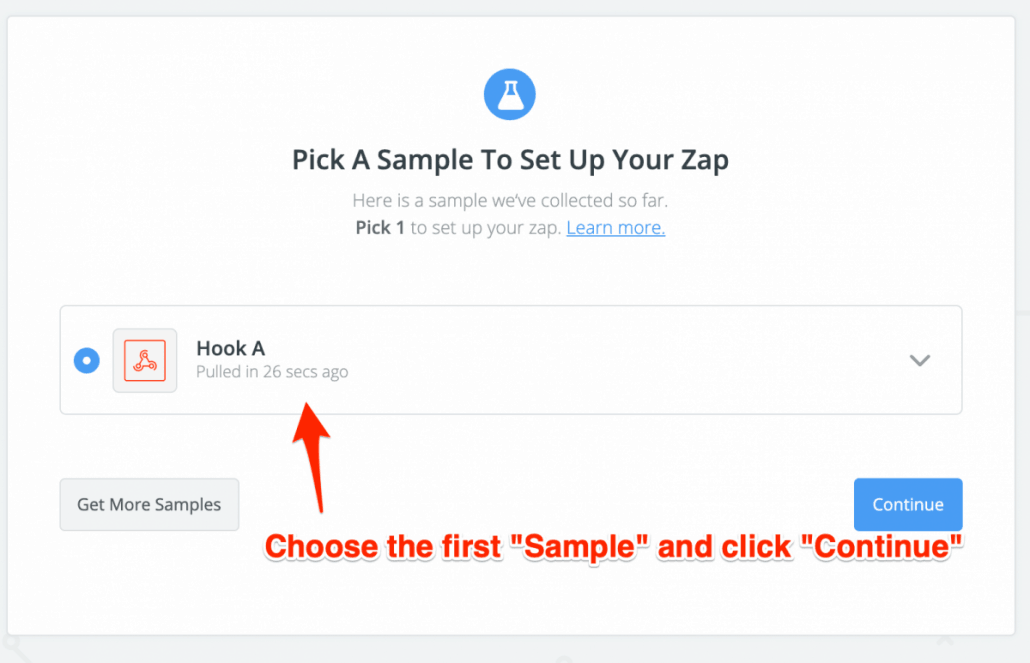 Now, add an “Action” step your “Zap’ to send a message to Slack.

To do that click “Add Step” and then choose “Slack” as the app you want to connect to.

Then choose “Send Channel Message” as the action you want to take: 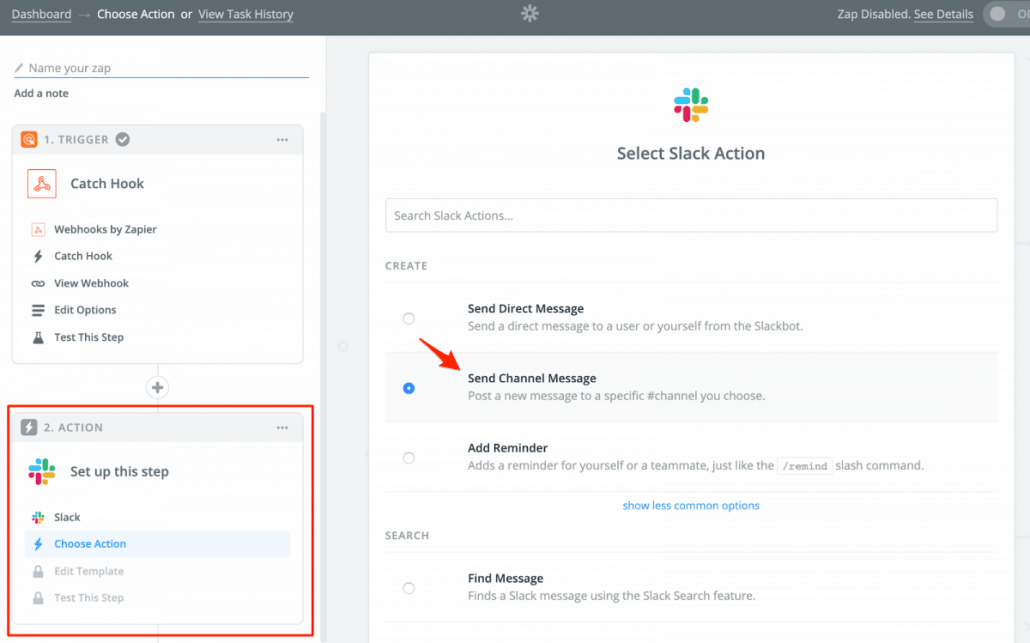 Next, Zapier will ask you which Slack account you want to send the message to.  If you haven’t done this already, then add a Slack account and sign into Slack in order to authorize Zapier to send messages.

Once that’s complete then you can setup the message that should be sent using dynamic fields from the sample Webhook that Apptoto sent when you manually cancelled an appointment. 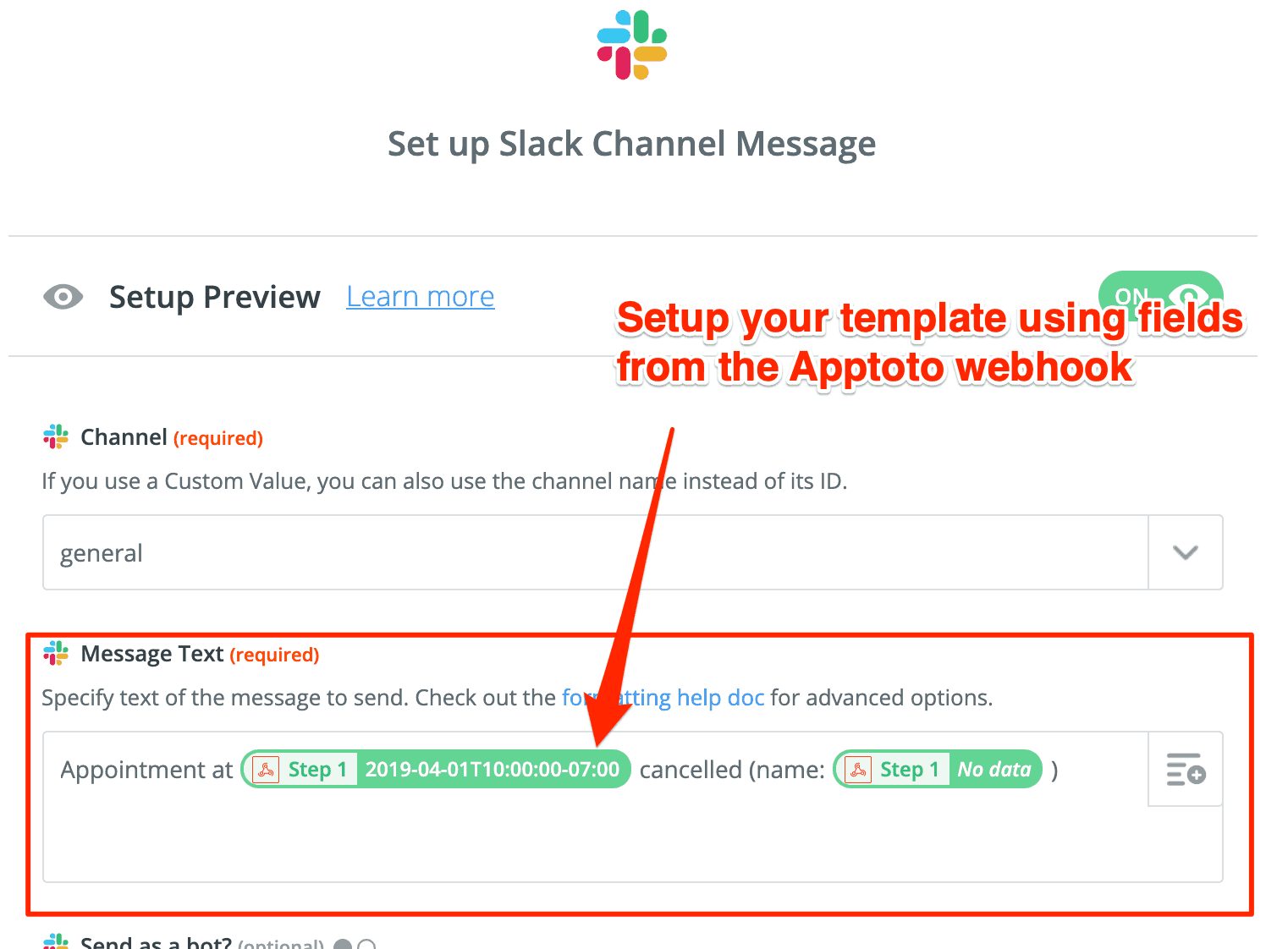 Click “Continue” and send a test to Slack.  Once you’re happy with the message and ready to turn the Zap on, click Continue and you should see this screen: 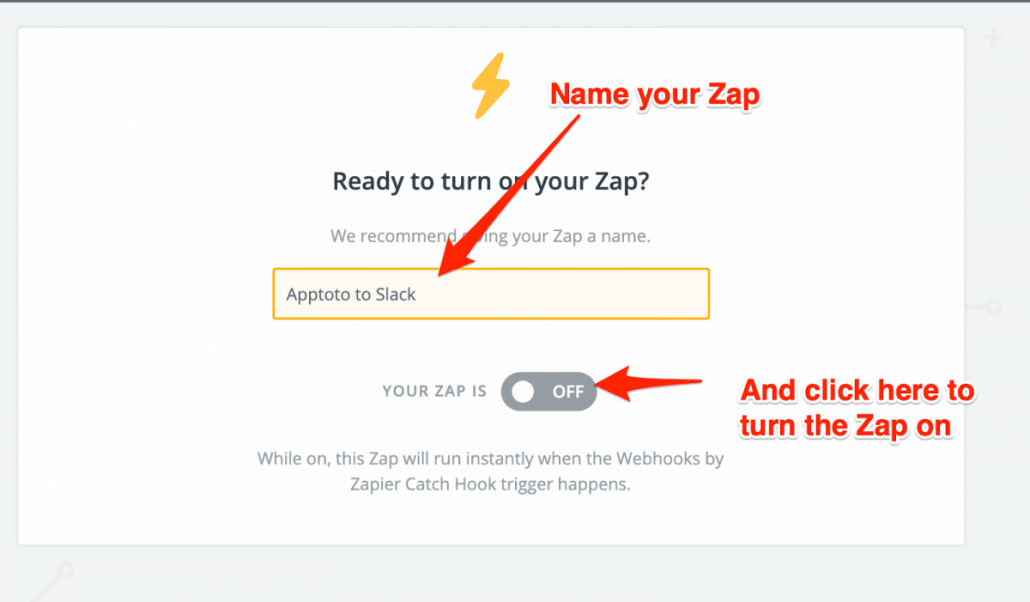 At this point, name your Zap and turn it on.

From then on, whenever someone cancels an appointment in Apptoto, Apptoto will trigger your Zap to happen.

We’re working on adding new trigger types to Apptoto, so please feel free to let us know if you need a trigger type that isn’t available in Apptoto currently.

Also, you may have noticed that the above steps involved a lot of manual/technical steps inside of Zapier.  This is because we have yet to release our
“Apptoto Zapier App” which will make a lot of the above steps easier.  It will also allow you to trigger events in Apptoto when things happen in other systems (i.e. it’ll be bi-directional).  If you’re interested in learning more about that, please let us know as always at support@apptoto.com.